While usually thought of as an increase in prices, inflation is more usefully defined as a fall in the value of money.

Fiat money is a liability of the issuing authority, usually a Central bank under the ownership of the Government although the legal status of the Federal Reserve in the USA is more complex.

For any nominal amount of public debt, inflation reduces the real value of the debt.

As a result, a monetary expansion, or inflation, in response to an increase in debt is a means, albeit one with many risks, to reduce the real debt burden.

So, inflation can be seen as a tax or, perhaps more meaningfully, an alternative to tax or expenditure cuts.

When we look at historical examples of public debt crises, we see that many were resolved, not by big increases in taxes or reductions in expenditure, but by inflation and, often an undermining of the currency with political implications.

For example, the Roman Emperors, even the very best ones, ran into many problems of inflation as they expanded the money supply to pay the troops that were engaged in military conquests.

‘If a man were called to fix the period in the history of the world during which the condition of the human race was most happy and prosperous, he would, without hesitation, name that which elapsed from the death of Domitian to the accession of Commodus.’

The period that Gibbons refers to is the second century AD, when Rome’s “five good emperors” – Nerva, Trajan, Hadrian, Antoninus Pius and Marcus Aurelius – brought a stability that Gibbon concluded had never existed since.

Gibbon may also have believed that western Europe would never see such good times again.  He would have been correct, up until the past 60 years anyway.

The second century was also the period that saw the maximum extension of the Roman Empire under Trajan.

However, these conquests and the demand for resources to protect the empire from invaders, particularly during the reign of Marcus Aurelius, led to regular bouts of inflation as the Emperors failed to perceive the link between minting coins to pay the army and inflation.

The Silver denarius, which had been introduced by Augustus as the basic coinage at the end of the 1st century BC, was initially 95% silver.  Trajan reduced this to 85% in 117AD, Marcus Aurelius to 75% in 180AD and by the time of Caracalla in 217AD it was only 50%.

The consequences of inflation in this period have been identified as one of the contributory factors leading to the ‘crisis of the 3rd century’.  This was a period when, out of  26 recognised emperors, all came from a military background and only one managed to survive long enough to die of a natural death.

Another well known example occurred during the reign of Henry VIII.

Henry attacked France in 1542 partly in response to a growing alliance between France and Scotland.  Within two years he was fighting with two armies one against France and one against Scotland.  While he had military successes on both fronts he had to withdraw from France due to a lack of money to finance the war.

Neither campaign produced any long-term gains but the cost of the wars, estimated at about £3 million, almost bankrupted the crown.

He attempted to finance the costs initially by selling assets and by big tax increases, but failed.  This led to a currency debasement and English currency, which up until then was made of valuable metals – principally gold and silver – so that the face value was approximately the same as the inherent value of the metal, was replaced by a mixture of silver and copper.

Fairly soon the silver content had fallen to less than 50%.  In other words, the value of the currency had fallen by 50%.  This led to rampant inflation that was only eliminated in the 1560s after the debased coins were fully withdrawn from circulation in 1562.

Again, the public debt crisis had been resolved by inflation.

What we Know Today

Today, we know the relationship between changes in the money supply and inflation as the Quantity Theory of Money.

We also know that this is best not thought of as an explanatory theory implying strict causation but as an identify: the quantity of money changing hands as payment for goods in a period will equal the value of goods changing hands.

The expansionary policy followed by the US Fed in recent years has been quite extraordinary.

The monetary base – that part of the money supply that can be thought of as being under the control of the Fed – has risen from about $850 billion in early 2008 just as the recession caused by the financial crises that began as a credit crunch was starting, to just under $4 trillion today.

Figure 1: US Monetary Base (Seasonally Adjusted.  Shaded area is recession).

But, despite this there is little sign of inflation in the economy.

The usual explanation is simply that there is no pricing pressure as the economy remains weak.

A better way to understand this is that the actual money supply that should be included in the Quantity Theory is made up of two parts: the monetary base and credit created by the banking system.  This latter element is not controlled by the Fed.

The relationship between eh monetary base and the money supply is the money multiplier.

Developments in the US money multiplier tell us a lot about the US economy.  This is shown in Figure 2 and shows that the money multiplier, which had been at about 1.6 in 2008 fell sharply during the recession and has continued to fall with the latest reading being 0.7.

In other words, the money supply in the US is only 70% of the monetary base.

This is a quite extraordinary situation and goes quite a way to explaining why the US has not seen much sign of inflation.

Of course, this is only a partial explanation as a simple calculation shows that the money supply would still have doubled.  However, there are two important implications.

The first is that although the additional money has been provided to the banks at almost zero interest rates, they are not going to just sit on it.

Instead they have been using it to buy financial assets – US Treasuries, so that the deficit can be funded without pushing up interest rates, and equities.  The result is a 4 year bull market in an economy that is not recovering strongly. 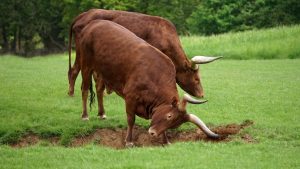 The second issue is that the monetary base has exploded and should the economy pick up with greater lending to the real economy then the money multiplier can be expected to also recover.

This has real implication for the money supply however it may be measured.  Can the Fed react to reverse this process in some manner and keep a lid on inflation?  Opinion is certainly divided, but history is not on their side.

Some Recent History of Inflation

We have a much more recent example than the ones discussed above albeit of a monetary inflation on a smaller scale.

This was in the 1970s when the stimulus provided to the USA economy by the need to finance the Vietnam War led to inflation, which was intensified by the oil crisis.

It was also transmitted to European countries that had not had such a big monetary stimulus bit had overly generous welfare states – relative to productivity – and facilitated price increases through expansionary policies when recession struck.

Europe was unable to resist the inflationary forces that were triggered by the oil crisis, even though it went into the crisis with economies that were mostly in a fairly healthy state, apart from the UK.

In terms of the policies being followed in recent years, the stability programmes that have been favoured in Europe focus on reducing debt by reducing the deficits that lead to debt, while an inflationary programme aims to allow short term deficits that will be eliminated by growth in the medium term with the debt burden being reduced by inflation.

Are current policies sustainable?  There are signs that commodities denominated in US dollars are starting to rise in price this year and the Fed has been talking about reversing policy.

The US is taking a gamble, but so too is the EU.

The Eurozone emphasis on stability may be required again to resist inflationary pressures from the US or from a shock such as another oil price increase.

The question then is whether the Eurozone, given that it could face this problem with a much weakened – perhaps stagnating – economy, would have the strength to resist such inflationary pressures as they would almost certainly imply a tightening of monetary policy, higher interest rates an even tighter controls on Governments’ budgets.

Therefore, while the sustainability of the Fed’s approach can be questioned, so too can that of the Eurozone which will not be immune from any fallout.