Earlier this year, KHSK Economic Consultant undertook work for the DCCAE on the payment of compensation to landowners in the vicinity of new electricity lines. An issue that arose was the potential health impacts of EMFs from new electricity transmission lines.

The research was undertaken against the background of the planned new North-South Interconnector. This planned infrastructure has generated quite a bit of controversy.

The payment of compensation to landowners is a well established practice. However, an idea that appeared to have wide credence was that overhead transmission lines can have health impacts such that no amount of compensation would be appropriate.

The conclusion for someone holding this view can only be that the lines should be put elsewhere, or underground.

The argument is made that overhead transmission lines generate electromagnetic fields (EMFs) that lead to increased risks of certain types of cancer.

The way this case was put to the consultants is best indicated by the following extract from a submission that was received during the consultation process.

I would ask you to consider the following statement from the Government Chief Scientific Officer:

“There is a body of epidemiological evidence which suggests that time-weighted average exposure to power line magnetic fields above 0.4µT is associated with a small increase in the risk of leukaemia in children.” He continues “it would correspond to an increase of about 1 case of childhood leukaemia in Ireland every four years.”

Given that the average emissions stated by EirGrid from the North-South interconnector will be 40 times higher than the figure above, can you include in the study what would be the recommended amount of compensation for the families visited by childhood leukaemia?

Given that we are economists and not scientists or health professional we are in no position to evaluate the claim that is made in the statement (within the quotation marks). So, we took it at face value, particularly as it appears to be more or less in line with published evidence from other countries.

Furthermore, we are certainly in no position to identify the appropriate level of compensation in a hypothetical scenario.

However, two things that are relevant economic concepts are striking about this and similar submissions along these lines.

The first is that the quote refers to an ‘association’ between transmission lines and the risk of childhood leukaemia. However, the it is clear from the final paragraph that the writer is interpreting this as meaning that transmission lines lead to or cause an increase in risk.

This is not a valid conclusion. An association or correlation is not the same as evidence of causation.

The second point is that the writer, along with others, appears to extrapolate that no amount of compensation is adequate for a family whose child might suffer from leukaemia after new transmission lines have been constructed. 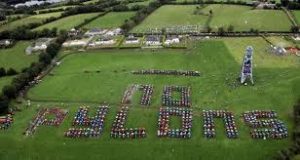 But this conclusion flies in face of the way in which society organises itself.

We might like to think that we don’t put a value on human life and that no expense should be spared to protect life. This is not the case.

If we did put preserving human life above all else we would make a number of changes. For example, statistics published by the RSA show that there were 158 people killed on Irish roads in 2017, a 15% drop on the previous year.

If we put the preservation of life above all else we should consider banning motorised vehicles from the country.

Obviously, this is not going to happen as the economic and social costs would be enormous. So big that we consider that the loss would exceed the value of the lives saved.

For a different example, look to the health service. It is very likely, almost certain, that some lives could be saved if we, for example, doubled the amount of money that is put into health. We could raise much of this by increasing PAYE taxes by, say, 10 percentage points.

How much support would this policy get? That we don’t do it shows that it is not a trade-off that we desire as a society.

The conclusion therefore is that even if it was proven that there is a causal relationship between overhead transmission lines and health defects it would not automatically follow that new lines should not be constructed.

What is the Scientific Evidence?

Therefore, it should be possible for properly qualified people to come to definitive conclusions in this regard. The issue has been widely studied and indeed this is the case.

It is not difficult to see where concerns regarding the possible impacts of transmission lines on health may have arisen. It is known that electricity transmission lines operate at high voltage and the strength of electromagnetic fields (EMFs) directly beneath the lines may reach up to 5µT (Bond et. al., 2013). 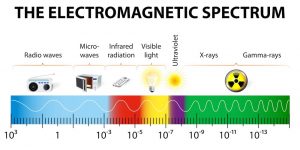 As EMFs are a form of radiation  it is a simple association to link radiation with adverse health effects stretching to cancers and cardiovascular problems.

What are the Health Impacts of EMFs?

The issue of a link between transmission lines and adverse health effects was examined by the World Health Organisation in 2007. They concluded that

there are no substantive health issues related to ELF electric fields at levels generally encountered by members of the public.

There is no clear evidence of a carcinogenic effect of ELF EMFs in adults and no plausible biological explanation of the association that can be obtained from experiments with animals or from cellular and molecular studies. … NRPB concludes that the results of epidemiological studies, taken individually or as collectively reviewed by expert groups, cannot currently be used as a basis for restrictions on exposure to EMFs. (NRPB 2004, page 38)

However, they went on to state that

The overall evidence for adverse effects of EMFs on health at levels of exposure normally experienced by the general public is weak. The least weak evidence is for the exposure of children to power frequency magnetic fields and childhood leukaemia. (page 146)

The first evidence of a link between magnetic field and childhood leukaemia was published in 1979 (Wertheimer and Leeper) and follow-up studies have confirmed a weak association between exposure to strong EMFs and the incidence of childhood leukaemia (Copes and Barn, 2008).

These studies found that exposure to EMFs greater than 0.3 – 0.4 µT were associated with a doubling of the risk of leukaemia. This level of exposure would arise at a distance of about 60 metres from a 500kV line. 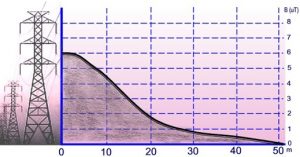 However, researchers have been unable to explain why this might be the case and have concluded that

There is an association between childhood leukaemia and proximity of home address at birth to high voltage power lines … There is no accepted biological mechanism to explain the epidemiological results; indeed, the relation may be due to chance or confounding.

The NRPB has reached a similar conclusion and stated that the association found between transmission lines and childhood leukaemia ‘is an observation for which there is no sound scientific explanation’.

It is an association, there is no known causal relationship.  As a result, the NRPB concluded that

Any judgements developed on the assumption that the association [between exposure to EMFs from any source and an increased incidence of childhood leukaemia] is causal would be subject to a very high level of uncertainty. (NRPB, page 133)

At the time of the research, about 200 children were being killed in road accidents each year in the UK. As a result, researchers have tended to conclude that rather than applying a precautionary principle approach in decision-making or trying to ensure that all transmission lines are distant from homes, given the level of uncertainty, the correct approach is to accept that:

Based on the available evidence, one can achieve much greater risk of reduction or health benefits if resources are directed to other larger, better established risks (Copes and Barn, 2008).

there are no clear scientific indications that the possible effects on human health may be potentially dangerous.

What the Science Concludes

The evidence therefore is that there is no proof of any adverse effects from EMFs on human health.

Furthermore, there are important issues to be considered before a conclusion regarding the impact of a transmission line on health can be drawn.

The strength of the EMF from transmission lines decreases with distance such that it would fall to 0.1µT, just 2% of the level directly underneath the line, at 50 to 100 metres away from the line. As well as distance, trees and buildings also reduce this strength so that the strength of EMFs inside a house will be only a fraction of outside.

There is a further important issue: EMFs are not only created by transmission lines. All electrical equipment including household items such as televisions, computers and mobile phones produce EMFs. 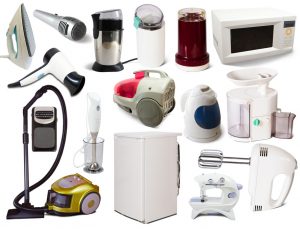 In addition, out of doors, EMFs are also emitted by distribution lines and people are generally much closer to these, and for much longer periods of time, than they are to high voltage transmission lines.

As a result of these factors, a World Health Organisation review concluded that the level of exposure to electric fields of people living in the vicinity of high voltage transmission lines actually differs very little from the average exposure of that is experienced among the general population.

Consequently, there are two distinct weaknesses in the argument that new transmission infrastructure will likely have detrimental health effects.

First, no causal link between EMFs and health deterioration has been found.

Second, the vast majority of the EMFs that would be experienced by people who live in the vicinity of power lines would arise from household appliances to which they are exposed all the time with new transmission infrastructure having no more than a small marginal impact.

So, is the Debate Settled?

The WHO estimates that in the region of 25,000 articles have been published over the past 30 years to examine the biological effects and medical applications of non-ionizing radiation. Consequently, scientific knowledge in this area is now more extensive than for most hazards.

The WHO reviewed this literature and concluded that current evidence does not confirm the existence of any health consequences from exposure to low level electromagnetic fields.

Despite these facts it is still commonly claimed that there are gaps in the knowledge and that more research needs to be done.

Of course, EMFs are not the only health issue that can arise with power lines and, while they have garnered most attention, direct contact with lines, while very rare, is a much greater risk.

However, this risk is contained in the sense that it will only be associated with specific instances such as during construction, if problems arise during maintenance or if lines fall to the ground.

This means that these risks do not arise during normal operations and so times of heightened risk are clearly indicated and can usually be managed. Furthermore, except in the rare cases when a member of the public might approach a fallen line the risks are restricted to employees of the electricity company.

In terms of the impact on human health and life, these risks are far more important than those posed by EMFs.

NRPB (2004) Review of the Scientific Evidence for Limiting Exposure to Electromagnetic Fields (0-300 GHz). Documents of the NRPG, Vol. 15(3)