We Don’t See It, but the Inflation is There

It’s a pretty well established concept:  if you don’t control your money supply and you allow it to grow rapidly then you risk inflation getting out of control.

Of course there is lots of difference of opinion around this. Is this not the usual case in economics?

But few would argue with the basic associations implicit in this concept.

So much so that the dominant objective of the ECB, some might say the only objective, has been to protect the currency.

And as everyone knows this is interpreted as an inflation target of 2 percent.

So, Where is the Inflation?

I’ve written about the risk of inflation previously in this post.

That was about 18 months ago now and the main theme of that post was that policy makers around the world were creating the basis for a coming great inflation.

Now, with no great change in policy, although the US authorities are expected to begin to reverse to some minor degree fairly soon, there is no sign of inflation.

At this time of writing, Oil is at its lowest level in many years with Gold also pushing low levels not seen since the initial policy reaction to the financial crash set off the wave of loose monetary policies.

So, what’s going on here?

The facts remain clear and are best captured by this chart of US money supply as measured by M1. 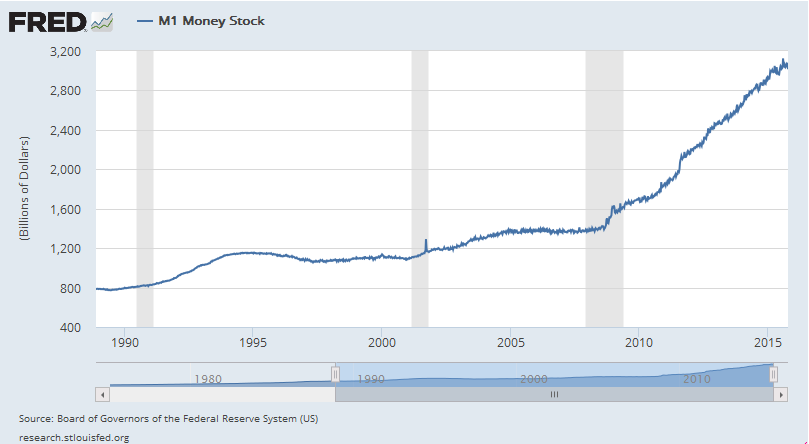 In this period, the US economy has grown by around 15%.

So, are we Wrong?

Economists that have been warning about inflation have been getting plenty of criticism in recent years.

After all, listen to Mario Draghi and he constantly mentions deflation.

And just about everywhere, Central Banks have been undershooting their inflation targets.

The economists are not wrong. We are creating the basis for a severe inflation.

The explanation is that just because the authorities have created huge liquidity – which shows up in M1 – it does not mean that this is translating into spending power in the real economy.

And even when it does, it is not being used.

The first of these requirements operates through the process of credit creation by the banks.

The implication is that actual spending power in the economy – the money supply that matters when looking at inflation – will be a multiple of the money that is created by the central authorities.

But look at what has happened the money multiplier in the US. 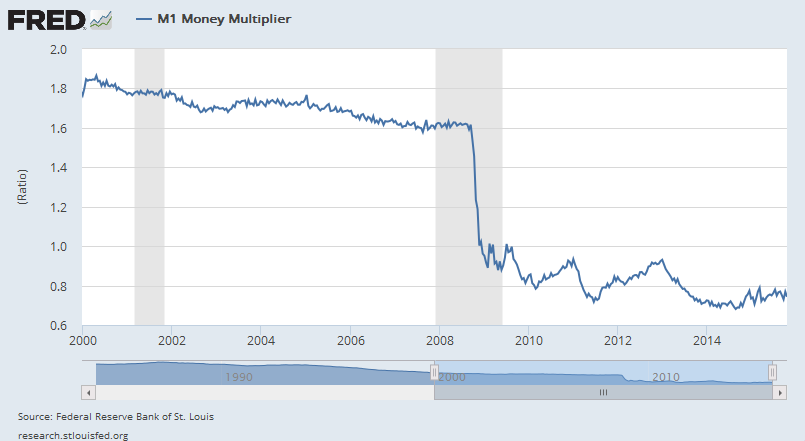 It collapsed from about 1.6 to below 1 during the credit crunch and shows no signs of recovering.

It remains solidly below 0.8.

This means that the banks are not putting the liquidity into the economy.

And that’s not all. When the money does get into the economy it is not being used as normal.

This is captured by the velocity of money measure. 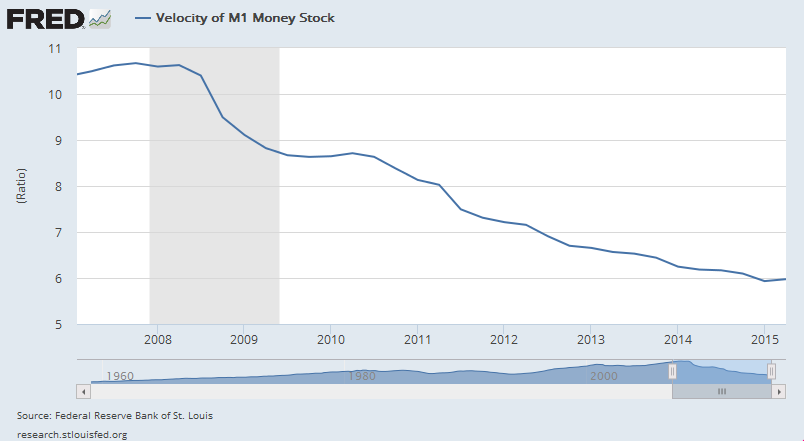 This has fallen from above 10 just before the financial crisis to about 6 this year.

However, it is now back at levels seen in the mid-1970s and shows no sign of reversing its decline.

That’s Why There is No Inflation, Yet

These charts show that while the authorities have greatly expanded liquidity, it is not leading to  increased spending power.

Whether this is a failure of banks to lend or a failure of potential borrowers to borrow is leading to a lot of heated argument.

But, what is clear is that things are not working as they should

Fear remains elevated. The reward to risk calculation is far better for the banks if they just keep the liquidity within the financial system.

But what happens when this changes? What if the recovery comes to be seen as sustainable?

Can the authorities really reverse the enormous increase in M1 without such extreme measures that would greatly damage the real economy?

And would they really be able to resist the political pressures that this would entail?

So the basis for a great inflation is being created, even if we don’t see the actual inflation in the form of rising commodity and consumer prices yet.

Despite booming stock markets, renewed economic growth and recovering property prices and consumer confidence, the effects of the financial crisis of 2008 are far from fully past.

The banks are not working in the way in which banks had operated for many decades.

For as long as fear dominates then inflation remains subdued.

But what if this changes?